Fostering To Adopt Isn’t a Thing, But It Became Our Thing. 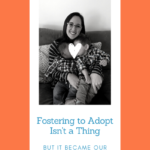 Now that we’re a few months removed from foster care with our newly adopted son, I feel like I can start writing and sharing. I have friends who are amazing at sharing their thoughts in the midst of the journey, but as an internal, and very slow processor, it takes me time to wade through all the feelings.

We (my husband and I) attended an informational meeting to be respite providers (essentially weekend babysitters for foster parents) in the spring of 2016, and then through a series of events decided to become full blown foster parents instead. I don’t think either of us went into it thinking that adoption would be the end result, or even hoping that was the case. If I’m being honest, our naive selves probably assumed we would take care of a sweet kiddo or two for a few months and then they would go back to their bio parents, with no damage done on either end.

The term foster-to-adopt seemed to be a common phrase we heard when people learned we were becoming licensed. They would say something like, “Oh, that’s great! Are you foster-to-adopt, or just straight fostering?” I didn’t really know how to answer at the time, and as we found ourselves in the trenches with our first placement, the question really started to bug me. It was one of those questions that is asked with good intention and from people who don’t know much about the world you’re in, and so I had to learn to graciously respond. I would usually say something like, “Reunification with the bio parents is almost always the primary goal in foster care, but if that isn’t feasible then we would consider adoption.” The term foster-to-adopt completely removes the possibility that the child’s birth parents would be able to work to get their child back and in my mind pegs the foster parent as completely anti birth family from the beginning.

Our first placement is now our adopted son, so how did we get to that point? We weren’t “fostering-to-adopt”, so how did we end up adopting our foster son? It wasn’t a cut and dry process, or a road map that we saw clearly when he showed up at our house at 1am on a Tuesday night. It was a long, up and down, topsy turvy, frustrating, messy, confusing, make your stomach hurt weekly process.

He came to us in May. We were told he would only be with us for a few days or maybe a few weeks tops once they found extended family for him to live with. Five days in I wrote this email to our case manager.

“I know there’s probably really no way of knowing what’s going to happen, but are emergency placements usually short-term? We’re getting pretty attached to this little guy and I’m trying to decide how much I should guard my heart… We’re just loving on him for as long as we have him, but with this being our first placement, we really have no idea what to expect!!”

She responded so graciously and reminded me that loving on him for now is exactly what we should be doing, but to keep in mind that he would most likely be going to family soon or if not, back to his parents after 6-12 months of them working their services.

We were mildly heartbroken, but tried to keep it at the back of our mind that this was going to be temporary. This was not a “foster-to-adopt” situation we were in.

Throughout the summer I took L to see his birth parents weekly, and we would always chat before visits in the waiting room. At the beginning they were skeptical, I was nervous, and everybody was cordial to each other. As the weeks progressed, his birth mom and I would continue to chat before and sometimes for awhile after visits. I would update her on his latest developments, and she would try to respond as if she had also spent the last 3 months caring for him. I can’t imagine how hard that must have been for her.

As we reached the 6 month mark, it became evident that the parents had some catching up to do if they were serious about reunification. Caseworkers and attorneys began to squirm, questioning if reunification was still the primary goal. We were currently just foster parents, but maybe that was changing to forever parents? I remember telling Kevin one day how strange it was that maybe we would always be parents now. I assumed that our first placement wouldn’t always be with us and so we would have a fun stint as parents, the placement would leave, and then we’d go back to being “Not Parents” again. But, things were starting to look like we were going to join the forever parents club.

During the Fall and Winter, visits were suspended and the goal was changed to non-relative adoption. This didn’t mean that reunification was off the table, but it did mean that the case had been re-assessed and the majority of L’s team was starting to advocate for non-relative adoption (us) in L’s best interest. So, now, we were fostering-to-adopt. That term that drove (and still drives) me crazy was becoming our story. We were fostering a child who was only meant to be fostered (brought-up, cared for) in the short-term and then returned to the people who brought him into this world. But, instead of him returning to the people who should have been the best option for him, his little life was now being turned on its end.

Come January, visits started up again and we were told once again that mom was doing well, working her services, and it was looking like she might be given another chance. As with all things foster care, things can change on a dime in every which way of speaking, and just like that, things went south. We had multiple no-show visits and after that things progressed to termination of parental rights in June, almost 13 months after L had come into our home.

And, then, 5 months later, our foster little turned into our adopted little. He turned us from temporary parents to forever parents, and we couldn’t have been more overjoyed.

I hope to write more about fostering in the future, and eventually might share about our current foster babe, but like I said before, I have quite a long thought process so it might be months! Thanks for understanding!